President Recep Tayyip Erdoğan has today officially disclosed that Turkey has made a discovery of significant natural gas reserves in the Black Sea following his pre-announcement midweek that he would soon deliver good news that would usher in a new era for the country. Fatih, Turkey‘s first-ever drillship owned by the state-run Turkish Petroleum Corporation (TPAO), set sail from Istanbul for a drilling mission in an exploration zone known as Tuna-1, also known as the Sakarya Exploration Zone, in the Black Sea on May 29, marking the 567th anniversary of the conquest of Istanbul.Accordingly, Fatih has discovered proven reserves of 320 billion cubic meters of natural gas, with all testing, analyzing, and engineering works already completed – a proof that more discoveries are in the pipeline as part of the first and largest-ever natural gas discovery in Turkey’s history. “This is only a small portion of the vast reserves,” said President Erdoğan in his address at the announcement ceremony. “Turkey, once a net importer of energy, is now poised to assume all extraction works itself. It will thus incorporate natural gas into the energy system based on domestic and national sources. We aim to commence utilization of the new Black Sea natural gas in 2023, and are looking forward to hearing good news from Mediterranean drilling works as well,” President Erdoğan added. Dubbed a “turning point” for Turkey by the Minister of Treasury and Finance Berat Albayrak, the discovery could help Turkey cut its dependence on energy imports once the gas has been commercially extracted.
Investment in Turkey please send us email info@propertyinturkey.com.tr or send watsapp message to +905432177377 .  PropertyinTurkey 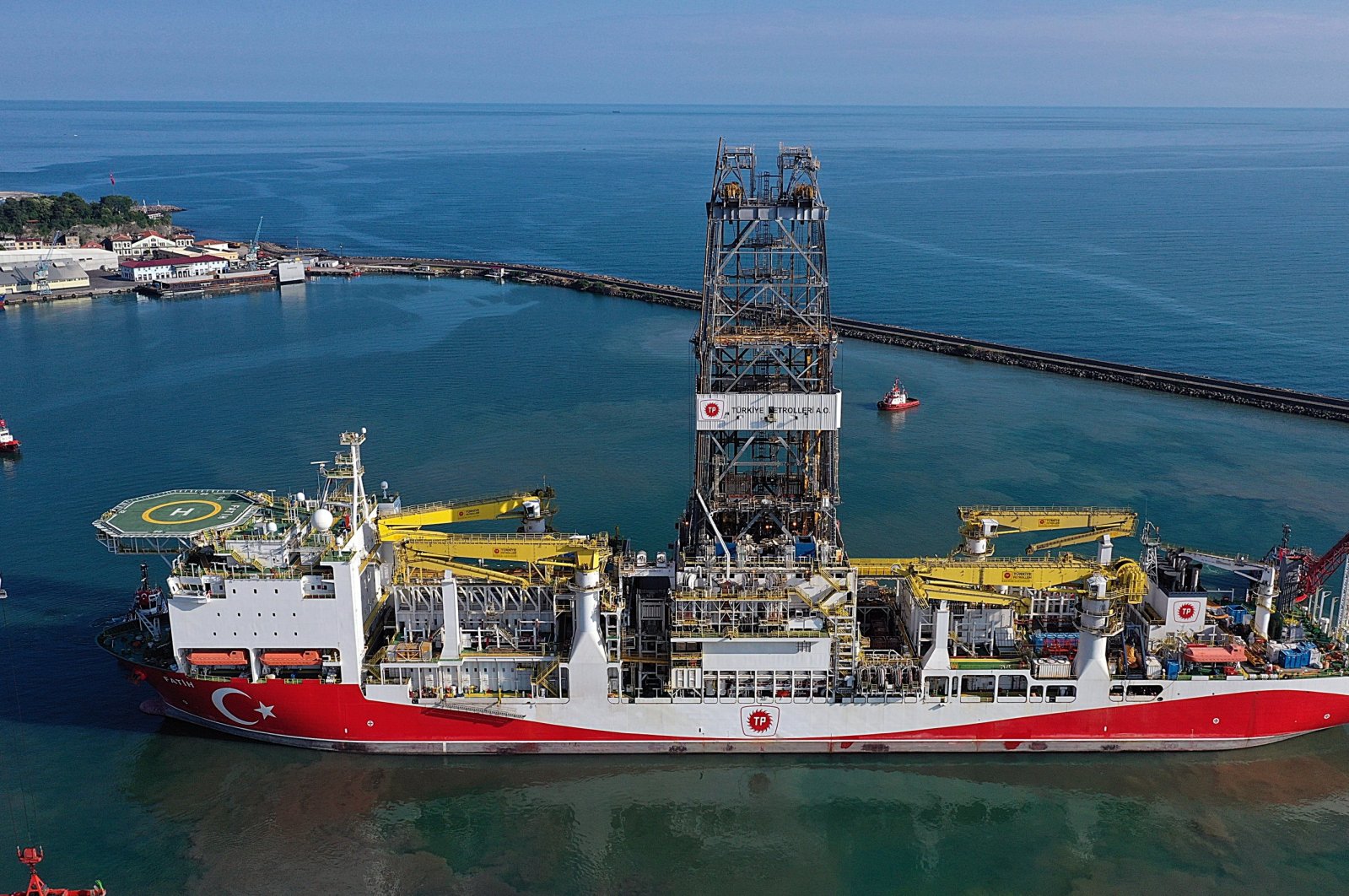 A drone photo shows the Turkish drillship Fatih leaving the Port of Trabzon for a drilling mission in the Black Sea, northeastern Turkey, June 26, 2020. (AA Photo)

In a historic announcement closely watched by millions in Turkey and followed from many capitals worldwide, Erdoğan said some 320 billion cubic meters (bcm) of natural gas was discovered in the Black Sea’s Tuna-1 zone where Turkey has been carrying out exploration activities, noting “the newly discovered reserves are only a piece of a larger resource,” and the country “will continue to discover more in the near future.”

Millions across Turkey waited patiently for 3 p.m. on Friday after Erdoğan said Wednesday he had “good news” that will mark a “new period” for Turkey.

The president said Turkey has long been dependent on foreign companies for oil and gas exploration activities, adding that steps to nationalize these efforts were launched during Finance Minister Berat Albayrak’s term as the country’s energy minister. Erdoğan specifically thanked Albayrak and current Energy Minister Fatih Dönmez for pioneering the projects.

Turkey’s natural resource exploration activities were initiated and gained ground during the period when Albayrak served as energy and natural resources minister between 2015 and 2018.

He was appointed to lead the Treasury and Finance ministry in the new Cabinet after Turkey switched from a parliamentary system to the current presidential system in 2018 after the majority of Turkish voters opted to create the new system.

Erdoğan underlined that the country’s mineral exploration policy changed in 2017, and Ankara commissioned three drilling ships along with two seismic vessels not only in the Black Sea but also in the Eastern Mediterranean. The newly discovered reserves are expected to be available for public use in 2023, he also said.

“We do not have the slightest external dependency in our research activities that we perform well below world prices. We have achieved this success because we act with local and national resources,” Erdoğan said.

Turkey’s first oil and gas drilling vessel, Fatih, set sail from northern Turkey’s Trabzon on June 25 for its long-awaited drilling mission in the Black Sea following the completion of installation projects. The Fatih drillship joined the Turkish Petroleum Corporation (TPAO) inventory in 2017, during Minister Albayrak’s term as an energy minister.

Fatih was set to start its first drilling activities in the Black Sea in the Tuna-1 zone in mid-July, Dönmez announced at the time.

The newly discovered natural gas was found during the ninth round of deep drilling, Dönmez said Friday, during a live broadcast from the drillship Fatih.

“The Tuna-1 well is located on the seabed at a depth of 2,100 meters (6,890 feet). We drilled 1,400 meters further, where we hit the gas reserve. We will drill a further 1,000 meters where two more layers are expected,” Dönmez said, highlighting that the quality of discovered gas is also high, “which will possibly affect (decrease) potential cost of extraction.”

Named after Istanbul’s Ottoman conqueror Sultan Mehmed II, the vessel has been carrying out activities in the region where drilling work had been suspended for an extended period of time.

The Tuna-1 zone is located off the mouth of the Danube block at the crossroads between the Bulgarian and Romanian maritime borders within the inland waters of Turkey.

Turkey’s first seismic vessel, Barbaros Hayrettin Paşa, had earlier carried out seismic surveys in the Black Sea and had identified rich reserves of natural gas in the Danube block in the Turkish waters of the western Black Sea. Romania and Bulgaria have been producing oil and gas for many years in the Danube block.

Natural gas has become the cheapest source of heating in Turkey compared to other fuel types such as coal and fuel oil, apart from its other usage areas, mainly in industry.

The current deficit in the energy field fell by nearly 12% to $33.9 billion (TL 248.90 billion) year-on-year in 2019, and energy items have a significant impact on the country’s current deficit, accounting for a large share of the total current deficit last year.

Albayrak, during the live broadcast from the Fatih drilling ship, said, “The current account deficit will no longer be on Turkey’s agenda thanks to this discovery,” as the country would rather be talking about the current account surplus from now on.

Turkey buys most of its natural gas through pipelines from Russia, Iran and Azerbaijan, in addition to some liquid natural gas (LNG) imports, mostly from Qatar, followed by the U.S.

Meanwhile, Russia’s share of Turkey’s natural gas imports decreased from 52% in 2017 to 33% in 2019, according to statistics compiled from the Turkish Energy Market Regulatory Authority (EPDK), as Ankara considered the purchase of cheaper natural gas and LNG an advantage for the diversification of its gas supplies. Turkey imported 45.21 billion cubic meters of natural gas in 2019 with liquefied natural gas (LNG) marking a 29% share.

In 2019, 473.87 million Sm3 (standard cubic meter) of natural gas was offered for sale by 8 domestic wholesale licensed companies. The amount of gas produced and offered for sale increased by 10.62% compared to 2018.

Activities to continue in East Med

Erdoğan, who said everyone, including the EU, knows that Turkey is right in its actions and they only harm themselves by acting against their own principles, stressed that: “We are expecting similar natural gas discoveries in the Mediterranean as well.”

In the first week of August, Turkey resumed energy exploration efforts in the Eastern Mediterranean after Greece and Egypt signed a controversial maritime delimitation deal.

The agreement came days after Ankara said it would postpone its oil and gas exploration as a gesture of goodwill.

But after declaring the Greek-Egyptian deal “null and void,” Turkey authorized the seismic research vessel Oruç Reis to continue its activities in an area within the country’s continental shelf.

The ship will continue its two-week mission until Aug. 23 along with the vessels Cengiz Han and Ataman.

The search for oil and gas has long been a source of tension between NATO allies Greece and Turkey. Turkey has accused Greece of trying to exclude it from the benefits of oil and gas finds in the Aegean Sea and Eastern Mediterranean. It argues that Greek islands should not be included in calculating maritime zones of economic interest – a position Greece says contradicts international law.

Greece has around 6,000 islands and smaller islets in the Aegean and Ionian Seas, more than 200 of them are inhabited. On the other hand, Turkey has the longest coastline in the Mediterranean.

Turkish drilling procedures in the Eastern Mediterranean fall under two categories: licensed areas issued by the Turkish Republic of Northern Cyprus (TRNC) to Turkey and the licensed areas that are issued by Turkey to the TPAO – Turkey‘s national oil company.

The country has so far completed six drilling studies in the Eastern Mediterranean, while the drilling vessel Yavuz is conducting a seventh in the Selçuklu-1 zone to the west of the island of Cyprus.

Turkey’s third drillship, Kanuni, arrived in Taşucu, Mersin, a coastal city in the Mediterranean region of the country, on March 15.

Following the completion of renewal and upgrade studies, Kanuni, which joined the fleet at the beginning of 2020, is also projected to start operations in the Mediterranean Sea this year.

Turkey expects its economy to grow 0.3% this year and accelerate to 5.8% next year as it recovers from the pandemic, Finance Minister Albayrak said, stressing the country would continue with normalization steps and support...
Read more
July 23, 2020

Should l buy Real Estate in Turkey during the coronavirus period ?

Should I buy real estate in Turkey during the coronavirus period?   Buy apartment during a pandemic, COVID-19 or as known with coronavirus was spread globally and affected all countries causing a crisis in economy...
Read more